The Last Runaway by Tracy Chevalier 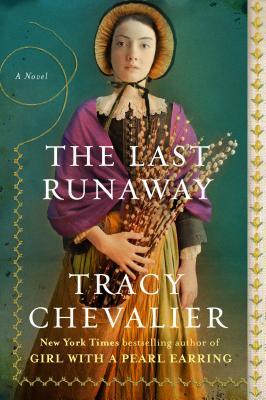 The Last Runaway by Tracy Chevalier was my favorite fictional read during the month of November! I'd been meaning to read something written by Tracy Chevalier for a few years now as many readers seem to love her novels... It was just up to me to decide on which one of her many novels to read first.
I happened to discover the paperback edition of The Last Runaway by Tracy Chevalier at a Little Free Library a couple of years ago, so my decision was made for me on which one of Tracy Chevalier's books to read first.
The Last Runaway by Tracy Chevalier is so engaging and well paced! I loved the writing, the storyline, and the characters for this novel. Honor Bright, the main character, along with Belle Mills and Mrs. Reed were my favorite characters in this novel.
The Last Runaway by Tracy Chevalier is a multilayered novel. This historical fiction novel is set in the 1850s in Ohio. Honor Bright leaves England on a voyage with her sister, Grace, to the United States as Grace is to be married to her English fiance, Adam, who has moved to the United States. The voyage isn't a smooth one for Honor as she becomes seasick and remains seasick the entire voyage to America. Then Honor's sister, Grace, dies from yellow fever as the two sisters make their way to Ohio by land to meet up with Adam in Ohio. This leaves Honor adrift on her own in a foreign country by herself to make the rest of her way to Adam.
Initially, I'd found it odd that Honor left her parents home (parents whom she loved) to go with her sister to America. However, we, as readers, learn that Honor was 'jilted' by her fiance, Samuel, for another woman outside their Quaker faith. Honor found this event difficult to deal with and to then also face those within her community over her loss. So, Honor ends up traveling overseas with her sister, Grace. Even after Grace passed away near the start of The Last Runaway, Honor decides to remain in America instead of returning to England to be with kin. I found myself wanting to know what would happen to Honor Bright and her future as she was now set adrift in an unknown land... And what a tale her story is!
Honor Bright is a Quaker and she lived within a Quaker community in England with her family. She then (of course) moves to another Quaker community near Oberlin, Ohio.
Honor loves to quilt and is admired for her sewing and quilting skills. As readers, we become familiar with Honor's thoughts, feelings, and the difficulties she experiences as she adjusts to her new life in America. Just how out of sorts Honor feels to be in a new country with strange people, but making the best of it as she goes along.
We also learn about the Quakers themselves and their beliefs. We read about slavery and its impact on America along with how divisive slavery is between the Northern states and the Southern states. The Underground Railroad is brought to life and the injustices of slavery itself. Honor is thrown into the mix as an outsider looking in and trying to make sense of the various points of view on slavery. She encounters those that are against slavery and are helping with the Underground Railroad efforts... Plus, we see those that are pro-slavery and hire slave catchers to catch runaway slaves attempting to flee to Canada.
All the while, Honor Bright has met up with her deceased sister's fiance, Adam, and it is an awkward initial meeting... Adam had no idea Honor was joining Grace on her voyage to America as he hadn't received Grace's letter stating Honor was coming with her. Honor goes to live with Adam and that becomes a difficult situation for a variety of reasons I won't spell out here.
Honor eventually meets Jack Haymaker through the Quaker church and marries him. He's a young man around the same age as Honor and is a dairy farmer living with his widowed mother and younger sister. Jack's mother doesn't take to Honor and makes life difficult for Honor. Honor helps the runaway slaves and this is one of the reasons Honor's mother-in-law takes a disliking to her.
Honor is forbidden to continue helping runaway slaves by her mother-in-law as it puts their lives at risk with a new law that had been recently enacted. The new law states that those that help runaway slaves may be fined for their actions, which means they could lose the family farm and their livelihood. This drives a wedge between Honor and her new family as Honor wants to help the runaway slaves flee to freedom. Slavery runs against her principles.
These are but a few of the highlights from The Last Runaway by Tracy Chevalier. There are many more details to this novel that I have not covered in this review.
Below is the plot summary for The Last Runaway by Tracy Chevalier from Amazon:

New York Times best-selling author of Girl With a Pearl Earring and At the Edge of the Orchard, Tracy Chevalier makes her first fictional foray into the American past in The Last Runaway, bringing to life the Underground Railroad and illuminating the principles, passions, and realities that fueled this extraordinary freedom movement.

Honor Bright, a modest English Quaker, moves to Ohio in 1850 - only to find herself alienated and alone in a strange land. Sick from the moment she leaves England, and fleeing personal disappointment, she is forced by family tragedy to rely on strangers in a harsh, unfamiliar landscape. Nineteenth-century America is practical, precarious, and unsentimental, and scarred by the continuing injustice of slavery. In her new home Honor discovers that principles count for little, even within a religious community meant to be committed to human equality.

However, Honor is drawn into the clandestine activities of the Underground Railroad, a network helping runaway slaves escape to freedom, where she befriends two surprising women who embody the remarkable power of defiance. Eventually she must decide if she too can act on what she believes in, whatever the personal costs.

I am giving The Last Runaway by Tracy Chevalier a rating of 5 stars out of 5 stars.
Until my next post, happy reading!
Posted by Captivated Reader at 12:00 AM