The Torment of Rachel Ames by Jeff Gunhus 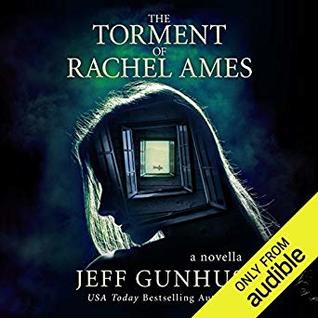 The Torment of Rachel Ames by Jeff Gunhus is another audiobook that has been on my radar for a long time now. I finally decided to listen to the unabridged audio version this month as a way too ease into the Halloween spirit.

I think the storyline/plot summary is what initially drew me to The Torment of Rachel Ames by Jeff Gunhus. Overall, I felt this novella missed the mark in terms of how the storyline was executed. Early on, I became disinterested in what was happening to the main character and where the story was headed. To be honest, I almost gave up on this audiobook a couple of times. The last few chapters were the most captivating in my opinion.

Listening time for The Torment of Rachel Ames by Jeff Gunhus is 4 hours, 21 minutes. I did not like Lisa Stathoplos as a narrator, so I will try to avoid audiobooks with her as a narrator in the future.

Below is the summary for The Torment of Rachel Ames by Jeff Gunhus from Audible:

Suffering from writer's block, novelist Rachel Ames escapes to a lake cabin to calm her mind and regain a sense of herself. The location is perfect. Isolated. Beautiful. Inspiring. It even comes with a good-looking landlord who shows an interest in her. But she can't shake the sense that something terrible has followed her to the lake, something just beyond her consciousness, something out on the edge where the sounds of a raging fire and sirens linger whenever she slows down to listen. Determined to make the cabin work, she tries to settle in and give her new life a chance. But when strange things begin to happen around her, she wonders if she's made a terrible mistake. As the darkness that's followed her manifests itself in inexplicable ways, her concept of reality is stretched thin and she realizes nothing at the lake is what it seems. As she fights to survive with her sanity intact, she understands too late that the location she's chosen for herself is far from perfect.

I am giving The Torment of Rachel Ames by Jeff Gunhus a rating of 2 stars out of 5 stars.