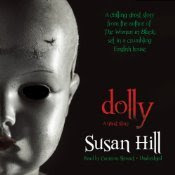 A chilling ghost story from the author of The Woman in Black, set in a crumbling English house...

The remoter parts of the English Fens are forlorn, lost, and damp even in the height of summer. At Iyot Lock, a large decaying house, two young cousins, Leonora and Edward, are parked for the summer with their aging spinster aunt and her cruel housekeeper. At first the unpleasantness and petty meanness appear simply spiteful, calculated to destroy Edward's equanimity. But when the spoiled Leonora is not given the birthday present of a specific dolly that she wants, affairs inexorably take a much darker turn with terrifying, life-destroying consequences for everyone.

I am giving Dolly: A Ghost Story by Susan Hill a rating of 2 stars out of 5 stars.
Until my next post, happy reading!!
Posted by Captivated Reader at 3:02 PM