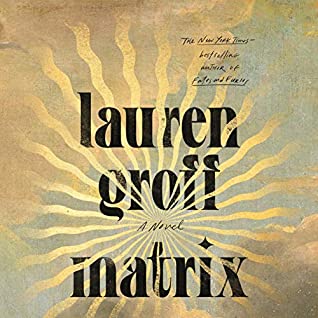 I have never read anything by Lauren Groff before, until now... But her previous books have been on my radar for quite a while. When I discovered Lauren Groff had come out with a new novel near the beginning of September and that sounded like a wonderful read, I couldn't resist reading her newest novel, Matrix.

I am so glad that I listened to the unabridged audio version of Matrix by Lauren Groff and narrated by Adjoa Andoh. Matrix falls into the category of medieval fiction and women's religious fiction set in England primarily at an impoverished abbey.

The writing for Matrix by Lauren Groff is very well done and very atmospheric in parts. At times, I felt like I was right in the thick of the action, Groff's writing is that good.

Matrix is definitely a feminist novel. I also think that the plot summary's description that this novel is a "timely exploration of the raw power of female creativity" is most definitely true as Marie de France is a force of nature to be reckoned with... And her feat at turning the abbey around is something to behold.

As a side note, let me add that I am glad I was never a nun during this time period. What a difficult life they lived!!

Listening time for Matrix by Lauren Groff is 8 hours, 51 minutes.

Below is the plot summary for Matrix by Lauren Groff from Audible:

Cast out of the royal court by Eleanor of Aquitaine, deemed too coarse and rough-hewn for marriage or courtly life, 17-year-old Marie de France is sent to England to be the new prioress of an impoverished abbey, its nuns on the brink of starvation and beset by disease.

At first taken aback by the severity of her new life, Marie finds focus and love in collective life with her singular and mercurial sisters. In this crucible, Marie steadily supplants her desire for family, for her homeland, for the passions of her youth with something new to her: devotion to her sisters, and a conviction in her own divine visions. Marie, born the last in a long line of women warriors and crusaders, is determined to chart a bold new course for the women she now leads and protects. But in a world that is shifting and corroding in frightening ways, one that can never reconcile itself with her existence, will the sheer force of Marie’s vision be bulwark enough?

Equally alive to the sacred and the profane, Matrix gathers currents of violence, sensuality, and religious ecstasy in a mesmerizing portrait of consuming passion, aberrant faith, and a woman that history moves both through and around. Lauren Groff’s new novel, her first since Fates and Furies, is a defiant and timely exploration of the raw power of female creativity in a corrupted world.

I am giving Matrix by Lauren Groff a rating of 4 stars out of 5 stars.