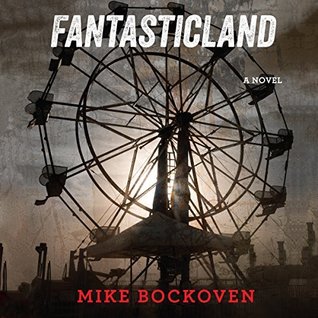 In an effort to get into the Halloween spirit during the month of October this year, I've chosen to read books that fall into the horror genre and/or books that are scary, spooky, or otherwise have elements of what might be considered fitting as a Halloween read.

With this in mind, I chose to listen to the unabridged audio version of Fantasticland by Mike Bockoven and narrated by Angela Dawe and Luke Daniels.

I am glad that I listened to Fantasticland by Mike Bockoven. It's well written and very engaging from start to finish. Fantasticland has been billed as the modern take on Lord of the Flies... I've never read Lord of the Flies before, so I can't do a proper comparison to know if the two novels are anything a like.

All I can say is that I LOVE the way Fantasticland by Mike Bockoven is formatted... The introduction is of a fictitious author setting up the scene for the way in which the story unfolds for Fantasticland... Each chapter after the introductory chapter is an interview of a person or employee who was either trapped at Fantasticland, a fictitious theme park in Florida, during a major hurricane or associated with the events that happened at Fantasticland in some way, shape, or form. The story each person shares in their interview about the grisly events that happened at the Fantasticland theme park while the employees were trapped onsite during the hurricane are gruesome!

The audio version of Fantasticland by Mike Bockoven is really well performed by both narrators, Angela Dawe and Luke Daniels. The audiobook gives listeners the feeling they are listening to a podcast.

Below is the summary for Fantasticland by Mike Bockoven from Audible:

Since the 1970s, FantasticLand has been the theme park where "Fun is Guaranteed!" But when a hurricane ravages the Florida coast and isolates the park, the employees find it anything but fun. Five weeks later, the authorities who rescue the survivors encounter a scene of horror. Photos soon emerge online of heads on spikes outside of rides and viscera and human bones littering the gift shops, breaking records for hits, views, likes, clicks, and shares. How could a group of survivors, mostly teenagers, commit such terrible acts?

Presented as a fact-finding investigation and a series of first-person interviews, FantasticLand pieces together the grisly series of events. Park policy was that the mostly college-aged employees surrender their electronic devices to preserve the authenticity of the FantasticLand experience. Cut off from the world and left on their own, the teenagers soon form rival tribes who viciously compete for food, medicine, social dominance, and even human flesh. This new social network divides the ravaged dreamland into territories ruled by the Pirates, the ShopGirls, the Freaks, and the Mole People. If meticulously curated online personas can replace private identities, what takes over when those constructs are lost?

FantasticLand is a modern take on Lord of the Flies meets Battle Royale that probes the consequences of a social civilization built online.

I am giving Fantasticland by Mike Bockoven a rating of 4 stars out of 5 stars.