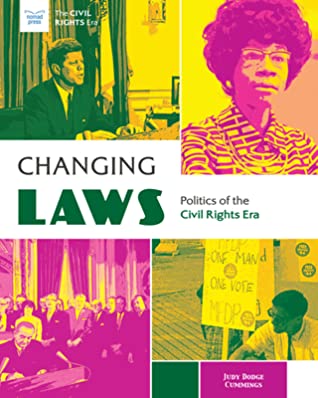 I received the paperback edition of Changing Laws: Politics of the Civil Rights Era by Judy Dodge Cummings for FREE through the Goodreads Giveaways program.

Below is my honest, unbiased review of Changing Laws: Politics of the Civil Rights Era by Judy Dodge Cummings.

Each chapter offers bite sized chunks of information, a timeline for events, fast facts, vocabulary, a project at the end of each chapter to help gain more understanding and so much more. At the end of Changing Laws: Politics of the Civil Rights Era by Judy Dodge Cummings there is a glossary for important terms and an excellent resource section for further reading.

As an additional side note, "Thurgood Marshall, who was later appointed a Supreme Court justice in 1967, became the lead NAACP attorney in the 1954 Brown case. His amicus brief filed for Mendez on behalf of the NAACP contained the arguments he would later use in the Brown case. The Mendez case also deeply influenced the thinking of the California governor at the time, Earl Warren. By 1954, when the Brown case appeared before the high court, Warren had become the chief justice." (Source Wikipedia)

In chapter 5 of Changing Laws: Politics of the Civil Rights Era by Judy Dodge Cummings, 2020 Inequality Stats (page 97) were given as follows and these stats are dismal:

Below is a summary for Changing Laws: Politics of the Civil Rights Era by Judy Dodge Cummings from Goodreads:

A deep dive into the politics of the civil rights era, including the passing of new laws and the presidential responses to protest. A terrific way for kids ages 12 to 15 to learn about the civil rights movement, both then and now! "We shall overcome" was the refrain of the civil rights movement, but overcoming centuries of discrimination was not easy. When the activism of civil rights protesters exposed the rampant racism embedded in America's politics for the world to see, political leaders in the federal government were forced to act. In Changing Laws: Politics of the Civil Rights Era, students ages 12 to 15 explore the key legislative and judicial victories of the era that spanned from 1954 to the early 1970s. The successes of Brown v. the Board of Education, the Civil Rights Act of 1964, the Voting Rights Act of 1965, and the Fair Housing Act of 1968 were the results of African-American activism and a growing awareness of social justice and injustice. Marches, demonstrations, boycotts, and lawsuits prodded local and state governments to reveal the bigotry of their laws and the brutality of their oppression of black citizens. As racial tensions ripped the country apart, presidents from Eisenhower through Nixon worked to uphold the U.S. Constitution, sometimes willingly and sometimes reluctantly. As members of Congress debated and negotiated, change came slowly. School doors opened to blacks. Restaurants served blacks. Blacks were allowed to cast their ballots. But victory was incomplete and came at a price. In this book, hands-on projects and research activities alongside essential questions, links to online resources, and text-to-world connections promote a profound understanding of history and offer opportunities for social-emotional learning. Meets multiple standards for the National Curriculum Standards for Social Studies.

Incidences of racial discrimination and racial division are in the news frequently, and this book informs readers of how political change during the civil rights movement of 1954 to the early 1970s eliminated some racial discrimination, but was unable to remove all obstacles to equality.

Today's division between political parties impedes legislative progress on many issues, and this book explores how similar political divisions were overcome in the 1960s, resulting in the passage of key civil rights laws.

Uses an inquiry-based approach to encourage readers to explore the present status of civil rights for blacks in the United States.

Projects include Mapping your school's degree of segregation, Deconstructing the photograph that moved John F. Kennedy to support the Civil Rights Act of 1964, and Research today's voter suppression.

Additional materials include a glossary, a list of media for further learning, a selected bibliography, and index.

I am giving Changing Laws: Politics of the Civil Rights Era by Judy Dodge Cummings a rating of 5 stars out of 5 stars.

Posted by Captivated Reader at 10:42 AM