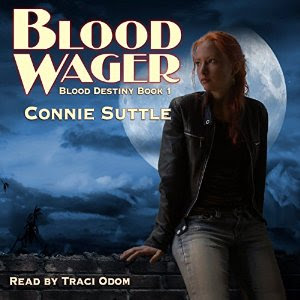 Lucky me!! I was offered a free unabridged audio version copy of Blood Wager: Blood Destiny Book #1 by Connie Suttle and narrated by Traci Odom by the narrator, Traci Odom!

Below is my honest, unbiased review of Blood Wager: Blood Destiny #1 by Connie Suttle and narrated by Traci Odom.

Blood Wager: Blood Destiny #1 by Connie Suttle
falls into the paranormal/fantasy genre. So,
if you love vampires and werewolves, then you'll love this novel.
The characters and plot are fun and well written.
I was pretty much captivated by the entire novel from start
to finish.

There were only a few minor negatives about the novel itself.
I loved the main character, Lissa, as she is a kind, strong, and sassy
character. However, I disliked that she lamented on several occasions about not having a vampire manual and wishing
she had one so that many of her answers about being a vampire could be answered. Her frustrations were understandable. But, Lissa broached the topic of not having a vampire manual TOO many times that it became annoying to me.

I was also sort of surprised that Lissa wasn't able to eventually
figure out that Gavin was a vampire on her own... But since she'd never been around vampires much before or after turning into
a vampire, it's a forgivable faux pas.

The best part of listening to the unabridged audio version
of Blood Wager: Blood Destiny #1 by Connie Suttle,
was listening to Traci Odom narrating this novel.
Traci Odom is an excellent narrator and does a great job
of reading each character's unique voice. So kudos to
Traci Odom!! She narrates all the other novels in the Blood Destiny series that have been published as well, which is good news.

The following is the publisher's summary of Blood Wager: Blood Destiny #1 by Connie Suttle from Audible:

"I agree to pay Sergio Velenci one million pounds if the female takes less than nine days to fully turn."

Lissa's life as a vampire begins on the day her husband is removed from life support. Turned by rogues who wager her life, Lissa is running from her maker who is determined to kill her, hunted by the Council who has branded her a rogue and blackmailed by werewolves, who utilize her newly developed talents for their own gain.

I highly recommend Blood Wager: Blood Destiny #1 by Connie Suttle and am giving it a rating of 4 stars out of 5 stars.

Until my next post, happy reading!
Posted by Captivated Reader at 5:47 PM