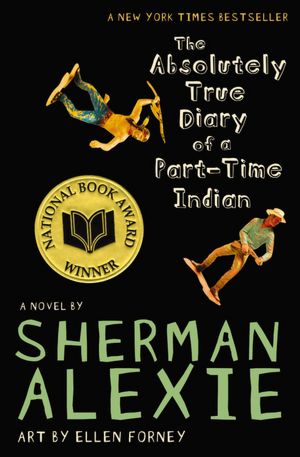 I found reading the following headline so disheartening!! I came across an article on The Christian Science Monitor titled World Book Night: cops are called as Idaho teen hands out challenged book by Molly Driscoll.... I simply had to read the article to see why the cops were called in while a teenager hands out a book to read on World Book Night.... And, of course, to read which challenged book was causing such a stir that police arrived on the scene!

So, when Brady Kissel and a couple of bookstore employees passed out copies of 'The Absolutely True Diary of a Part-Time Indian' by Sherman Alexie on World Book Night to other students, "police arrived at Kleiner Park, saying someone had called them, worried that young people were getting copies of the book without having permission from a parent."

However, there is some good news to share here. In Molly Driscoll's article, she writes the following:

However, after talking with Kissel, police “said they found nothing wrong with what was going on in the park,” according to Shelf Awareness.

The books that weren’t given away on April 23 were stored at Rediscovered Books for students and “Diary” publisher Little, Brown has said it is donating another 350 books. According to Rediscovered Books, those copies will be given to local libraries, school libraries, and teachers who are in need of more copies.

Laura “Wally” Johnson, one of the bookstore workers who handed out copies of “Diary” with Kissel, told Publishers Weekly that her time doing so “was a fantastic experience with a warm and enthusiastic atmosphere and a steady stream of polite and engaged young adults.”

“We got to have a lot of conversations with students about the history of censorship and book banning and we got to talk a lot about World Book Night,” she said.

Alexie himself praised the efforts of those involved, particularly Baker and Lott, to get copies of "Diary" to students.

"I am honored by the hundreds of Meridian students who showed incredible passion and courage for books,” he said, according to Publishers Weekly. “Mine, yes, but literature in general. And Sara Baker and Jennifer Lott are friggin’ superheroes. If I ever get caught in a fire, I’m calling them."

"Diary" placed at number three on the American Library Association's list of most-banned or -challenged books in 2013.


Yes, you have to love a happy ending to a story!!
Posted by Captivated Reader at 10:52 AM