African American Athletes Who Made History by Louis Moore 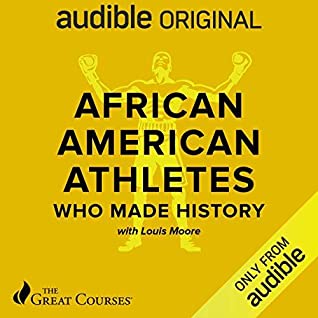 Professor Louis Moore’s audiobook about the history of African Americans in sports in the United States educates listeners about the fascinating social and cultural history of the nation. For example, integration of major league and professional sports broke a major color barrier for one of the first times in the early years of the Civil Rights Movement. African American athletes competed in America long before the 20th century - in fact, they even competed during the years of slavery.
Hear how the struggles and triumphs of these and other African American sports stars opened doors for professional players who came to dominate their fields, including Serena Williams and Michael Jordan. Learn about the founding of Black sports leagues during the years of segregation, how the Great Migration reshaped athletics in America, and how African American athletes balanced their athletic success with the everyday reality of racism and became engines of social change. While sports helped level the playing field in many ways, Black athletes still grapple with the legacy of inequality in America today.

I am giving African American Athletes Who Made History by Louis Moore a rating of 4.5 stars out of 5 stars.
Until my next post, happy reading!!
Posted by Captivated Reader at 1:32 PM