Stop the Wedding! by Stephanie Bond 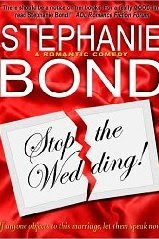 In this never-before-in-print romantic comedy, Annabelle Coakley and Clay Castleberry are determined to stop their parents from getting married...they didn't count on falling in love themselves!

I am giving Stop the Wedding! by Stephanie Bond a rating of 2 stars out of 5 stars.