As I already mentioned in my blog post two days ago, Banned Books Week is happening next month from September 30th through October 6th.

Wikipedia has published a List of most commonly challenged books in the United States, which is a good starting point to search for a book to read for Banned Books Week. Also check out the American Library Association website for a list of banned and challenged books. 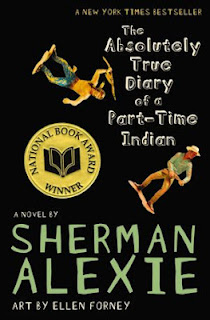 During Banned Books Week, I will be reading The Absolutely True Diary of a Part-Time Indian by Sherman Alexie.

According to the Banned Books Week website, The Absolutely True Diary of a Part-Time Indian by Sherman Alexie was one of the ten most challenged book titles of 2011.

I'll make another post during Banned Books Week, where you can share your thoughts about the banned book you read! I'll be sharing my thoughts about The Absolutely True Diary of a Part-Time Indian as well.

Until my next post, happy reading!
Posted by Captivated Reader at 12:30 PM