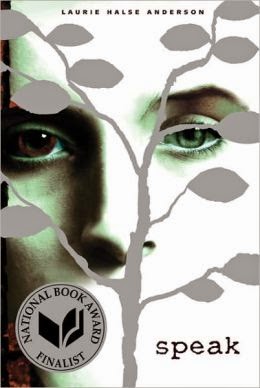 I purchased a copy of Speak by Laurie Halse Anderson, a young adult novel, to read for Banned Books Week.

However, I was too curious about Speak to wait until Banned Books Week (September 21st -27th, 2014) to read it!

I enjoyed reading Speak quite a bit despite the sad and tragic event of rape that happens to the leading character, Melinda, during the summer between middle school and high school and how this rape negatively effects Melinda long term. Melinda is raped by an older high school student... The rape scene isn't overly graphic. Nor is it mentioned until much later in the novel. But the rape scene itself definitely explains Melinda's withdrawn behavior, negative thoughts, and isolation.

Speak is written in the first person narrative and is told through Melinda's perspective. The novel is moved forward in a manner that almost reads like a series of diary entries.

The following is an overview of Speak from the Barnes & Noble website:


"Speak up for yourself—we want to know what you have to say." From the first moment of her freshman year at Merryweather High, Melinda knows this is a big fat lie, part of the nonsense of high school. She is friendless, outcast, because she busted an end-of-summer party by calling the cops, so now nobody will talk to her, let alone listen to her. As time passes, she becomes increasingly isolated and practically stops talking altogether. Only her art class offers any solace, and it is through her work on an art project that she is finally able to face what really happened at that terrible party: she was raped by an upperclassman, a guy who still attends Merryweather and is still a threat to her. Her healing process has just begun when she has another violent encounter with him. But this time Melinda fights back, refuses to be silent, and thereby achieves a measure of vindication. In Laurie Halse Anderson's powerful novel, an utterly believable heroine with a bitterly ironic voice delivers a blow to the hypocritical world of high school. She speaks for many a disenfranchised teenager while demonstrating the importance of speaking up for oneself.

Speak by Laurie Halse Anderson has been censored. According to Wikipedia, I learned the following information regarding the censorship of Speak:


Speak's difficult subject matter has led to censorship of the novel.[6] Speak is ranked 60th on the ALA's list of Top 100 Banned/Challenged Books for 2000-2009.[25] In September 2010, Wesley Scroggins, a professor at Missouri State University, wrote an article, "Filthy books demeaning to Republic education", in which he claimed that Speak, along with Slaughterhouse Five and Twenty Boy Summer, should be banned for "exposing children to immorality".[26] Scroggins claimed that Speak should be "classified as soft pornography" and, therefore, removed from high school English curriculum.[26] In its 2010-2011 bibliography, "Books Challenged or Banned", the Newsletter of Intellectual Freedom lists Speak as having been challenged in Missouri schools because of its "soft-pornography" and "glorification of drinking, cursing, and premarital sex."[27]

I don't think Speak by Laurie Halse Anderson should be censored at all. It doesn't glorify cursing, drinking, and premarital sex at all in my opinion. I think young adult readers should be able to read Speak as it does deal with real life issues, like rape, and gives a plausible real life scenario of the emotional and physical aftermath of rape.


The following is a You Tube Video of Laurie Halse Anderson talking about Speak. I found the video to be very informative and educational. I always enjoy hearing why and/or how an author comes to write the books they do.

I am giving Speak by Laurie Halse Anderson a rating of 8 stars out of 10 stars. Until my next post, happy reading!
Posted by Captivated Reader at 12:57 PM