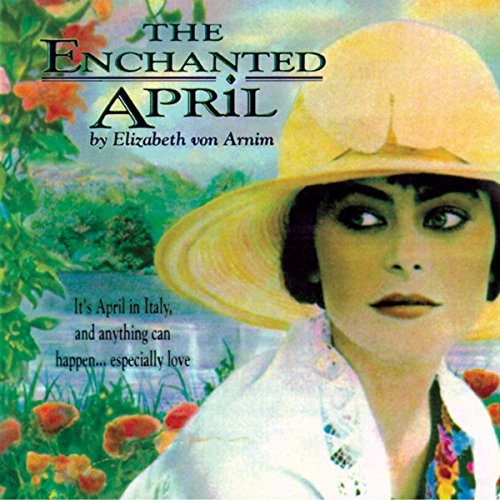 The Enchanted April by Elizabeth von Arnim was first published almost a century ago in 1922. It's a good classic, historical fiction novel. But frankly, I enjoyed the movie adaptation a bit more than I did the novel... There's only been a couple of times where I've enjoyed the movie version more than the novel itself and this was definitely one of those times.

The Enchanted April by Elizabeth von Arnim starts off well enough and even ends well enough, but the middle of the novel has its ups and downs for me... On the one hand, I enjoyed reading about what each of the four female main characters was thinking in more detail as they arrive and begin to unwind during their month long vacation/stay at a medieval castle in Italy.

Each main of the four main character couldn't be more different from the other in terms of age and class... Being female, English, and their shared need to leave the dreary weather of London, England seemed to be their only common thread at the start of the novel. The insights to each woman's inner thoughts gave readers an enlightening perspective to their personal desires/thoughts and a glimpse of what a woman's life was like during this time period. But learning about their inner thoughts became too much after a while. I wish some of it had been pared down a bit quite frankly.

I enjoyed the interactions between the characters in The Enchanted April and learning about where they were staying the most. Plus, seeing the transformation of each of the main characters by the novel's ending was also an added perk.

Listening time for The Enchanted April by Elizabeth von Arnim is 8 hours, 13 minutes. The narration for this novel was decent enough.

Below is the plot summary for The Enchanted April by Elizabeth von Arnim from Audible:

Four very diverse women, all seeking revitalization and escape from the dreary February rains of 1920s London, rent the small medieval castle of San Salvatore, nestled high above the bay of Portofino, Italy. Arriving at San Salvatore, they find it awash with the scent of flowers, its olive groves terracing down to the sun-warmed sea.

Mrs. Wilkins and Mrs. Arbuthnot are glad to leave their insipid duties and unresponsive husbands behind; the elderly Mrs. Fisher wishes only to sit in the sun and replay her youthful memories; and the bewitchingly beautiful Lady Caroline Dester desires to have seclusion from all adoring suitors. A month of blissful privacy at San Salvatore promises to be the remedy each of them is looking for. Amid the canopies of fragrant wisteria, in the sweet sunshine and melodious silence, four lives are transformed and resuscitated by the magic of San Salvatore.

I am giving The Enchanted April by Elizabeth von Arnim 3 stars out of 5 stars.