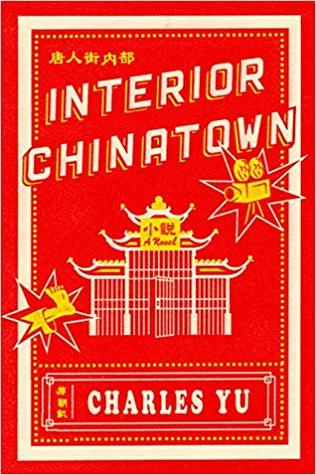 Curiosity got the better of me though, so I decided to listen to the unabridged audio version of Interior Chinatown by Charles Yu and narrated by Joel de la Fuente earlier this month.

I enjoyed Interior Chinatown by Charles Yu much more than I expected I would. This novel is written like a screenplay, which made it all the more unique.

I must also add that listening to Joel de la Fuente narrate Interior Chinatown was a true pleasure... In fact, I may have liked Interior Chinatown just that much more as an audiobook than I would probably have if I had simply read this novel instead.

Interior Chinatown by Charles Yu is a satire that focuses on the stereotypes that befall Asian Americans in a way new and engaging way that makes one think about "race, pop culture, immigration, and assimilation." If you like satire, then this novel is a good one.

Below is the plot summary for Interior Chinatown by Charles Yu from Audible:

"One of the funniest books of the year...a delicious, ambitious Hollywood satire." (The Washington Post)

From the infinitely inventive author of How to Live Safely in a Science Fictional Universe comes a deeply personal novel about race, pop culture, immigration, assimilation, and escaping the roles we are forced to play.

Willis Wu doesn’t perceive himself as a protagonist even in his own life: He’s merely Generic Asian man. Sometimes he gets to be Background Oriental Making a Weird Face or even Disgraced Son, but he is always relegated to a prop. Yet every day he leaves his tiny room in a Chinatown SRO and enters the Golden Palace restaurant, where Black and White, a procedural cop show, is in perpetual production. He’s a bit player here, too, but he dreams of being Kung Fu Guy - the most respected role that anyone who looks like him can attain. At least that’s what he has been told, time and time again. Except by one person, his mother. Who says to him: Be more.

Playful but heartfelt, a send-up of Hollywood tropes and Asian stereotypes, Interior Chinatown is Charles Yu’s most moving, daring, and masterly novel yet.

I am giving Interior Chinatown by Charles Yu a rating of 4 stars out of 5 stars.

Posted by Captivated Reader at 12:02 PM