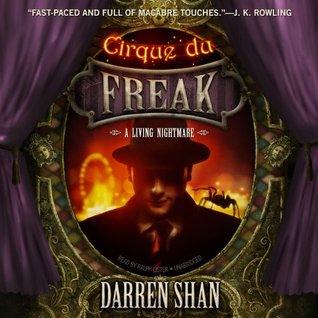 Cirque du Freak: A Living Nightmare (Cirque du Freak #1) by Darren Shan is a surprise read for me this year. It's not a book that had been on my radar, but the storyline and reviews of this novel and series reeled me in. I listened to the unabridged audio version of this young adult/fantasy novel, which is the 1st novel in the Cirque du Freak series.
I absolutely enjoyed Cirque du Freak: A Living Nightmare (Cirque du Freak #1) by Darren Shan!! The writing and storytelling is fabulous. Ralph Lister is a magical narrator and made listening to Cirque du Freak come alive.
The story revolves around Darren Shan and his best friend, Steve, attending a performance of Cirque du Freak. They must attend in secret as freak shows are illegal and their parents wouldn't allow them to attend the event most likely even if the shows weren't illegal.
Darren and Steve love the freak show and the various performances within the show... There is even a poisonous spider that performs in the freak show, which Darren loves as he loves spiders.
However, things go south fast when Steve recognizes a performer, Mr. Crepsley, and that Mr. Crepsley is a vampire. Steve decides to confront Mr. Crepsley after the show and asks him to turn him into a vampire, which Mr. Crepsley flatly declines to do. Steve isn't happy with Mr. Crepsley's answer, period and says things to Mr. Crepsley that don't sit right with Darren. Darren begins social distancing himself from Steve.
Things become more interesting when Darren decides to steal Mr. Crepsley's poisonous spider. Darren must hide/keep the spider secret from his family as they would never let him keep the spider. Darren works with spider in gaining its trust and training it to do tricks. But, of course, Steve stops by for a visit with Darren who now has to explain why he's been avoiding Steve... Darren shows Steve the poisonous spider... And wouldn't you know it, Steve is bitten by the spider and is rushed to the hospital unconscious.
Things turn even more interesting at this point for Darren in order to save Steve and I'll leave it at that to avoid spoiling the ending.
Below is the summary for Cirque du Freak: A Living Nightmare (Cirque du Freak #1) by Darren Shan from Audible:

In the tradition of Ray Bradbury’s Something Wicked This Way Comes and Stephen King’s Salem’s Lot, New York Times best-seller Cirque du Freak is the first title in the popular Saga of Darren Shan series.

Darren Shan and his best friend, Steve, get tickets to the Cirque du Freak, a wonderfully gothic freak show featuring weird, frightening half human/half animals who interact terrifyingly with the audience. In the midst of the excitement, true terror raises its head when Steve recognizes that one of the performers - Mr. Crepsley - is a vampire!

Steve confronts the vampire after the show finishes - but his motives are surprising! In the shadows of a crumbling theater, a horrified Darren eavesdrops on his friend and the vampire, and is witness to a monstrous, disturbing plea. As if by destiny, Darren is pulled to Mr. Crepsley and what follows is his horrifying descent into the dark and bloody world of vampires.

This is Darren’s story.

I am giving Cirque du Freak: A Living Nightmare (Cirque du Freak #1) by Darren Shan a rating of 5 stars out of 5 stars.
Until my next post, happy reading!
Posted by Captivated Reader at 7:02 PM