The Seance by Joan Lowery Nixon 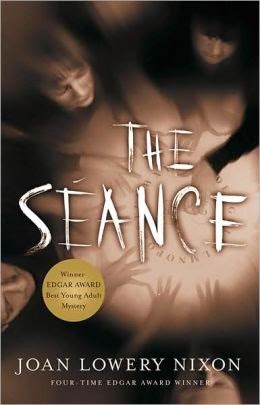 As far as The Seance is concerned, I chose to read it because I like mystery novels as well as well-written young adult novels... The Seance has also received good ratings online and the storyline sounded intriguing to me... The really basic storyline involves a group of teenage girls, who decide to attend a seance put on by a classmate. Things turn deadly when one girl goes missing during the seance and is later found murdered. Additionally, the teenage girl who hosted the seance also goes missing later in the novel and is found murdered as well.

Initially, I thought The Seance started off on the slow side and almost decided to give up on reading it. It didn't pick up the pace until around page fifty, when all the action finally began taking place. After page fifty, The Seance kept my attention for the most part with some additional lulls here and there.

I pretty much figured out who did the murders and why about two-thirds of the way into The Seance, which sort of bummed me out to have figured it out that early onward..

I liked the all the characters in The Seance for the most and thought they were well developed enough. My favorite character was Lauren, the leading character in The Seance, followed by that of her Aunt Mel. The plot was also good, especially the last few chapters when the murderer is revealed to the reader.

My favorite quote from The Seance is the following one: "We stared at each other across the table like two hypnotized chickens at a carny show." Just the imagery of this sentence and it being an unexpected image had me letting out a burst of laughter.

I'm giving The Seance an overall rating 7 stars out of 10 stars. I enjoyed reading Lois Lowery Nixon's writing well enough to add another one of her titles to my ever growing reading wishlist.

Until my next post, happy reading!!
Posted by Captivated Reader at 2:04 PM