The Reversal by Michael Connelly 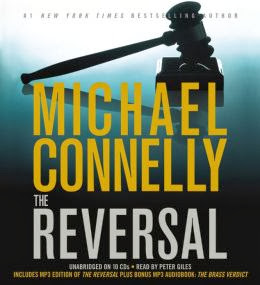 I recently listened to the unabridged audio version of The Reversal by Michael Connelly and read by Peter Giles.

Book Overview For The Reversal from the Barnes & Noble Website:

Longtime defense attorney Mickey Haller is recruited to change stripes and prosecute the high-profile retrial of a brutal child murder. After 24 years in prison, convicted killer Jason Jessup has been exonerated by new DNA evidence. Haller is convinced Jessup is guilty, and he takes the case on the condition that he gets to choose his investigator, LAPD Detective Harry Bosch.

Together, Bosch and Haller set off on a case fraught with political and personal danger. Opposing them is Jessup, now out on bail, a defense attorney who excels at manipulating the media, and a runaway eyewitness reluctant to testify after so many years.

With the odds and the evidence against them, Bosch and Haller must nail a sadistic killer once and for all. If Bosch is sure of anything, it is that Jason Jessup plans to kill again.

The dramatic reader can make or break the enjoyment for the listener of an audiobook. I should know as I'll readily stop listening to any audiobook if the reader is awful. With that said, I felt that Peter Giles did an excellent job in performing the dramatic reading of The Reversal. I hope to listen to other audiobooks read by Peter Giles in the future.

I'm giving The Reversal an overall 4 star out of 5 star rating.

Until my next post, happy reading!!
Posted by Captivated Reader at 6:00 AM