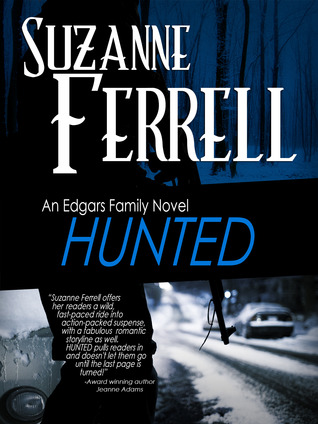 The second book in the Edgars Family Romantic Suspense series.

In one fiery explosion Katie Myers' witness protection cover is blown. Unable to trust the Marshals who've been responsible for her safety, she's on the run from the cult leader she put on death row. In desperation she forces a near stranger at gunpoint to help her hide.

By-the-book patrolman Matt Edgars is shocked when the woman he's come to rescue points a gun at him and demands he help her leave a crime scene. The stark terror in Katie's beautiful eyes has him breaking rules for the first time in his career.

With a hit man on their trail, Matt must break down the walls Katie has built to guard the secrets of her past. If not the cult leader will fulfill his prophecy and take the one woman Matt has ever loved to the grave.

I am giving Hunted by Suzanne Ferrell a rating of 3.5 stars out of 5 stars.
Until my next post, happy reading!!
Posted by Captivated Reader at 12:00 AM