The Taster by V. S. Alexander 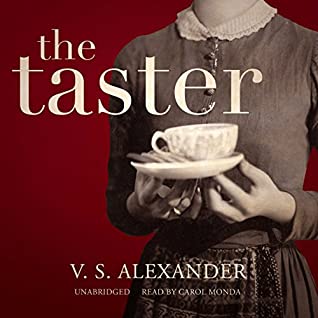 Madga isn't into party politics or even a fan of Hitler, but she manages to keep her feelings to herself and lives an insular life inside Berghof, Hitler's mountain retreat. It was very interesting to read about Magda's life as a taster for the Fuhrer and life inside the Fuhrer's inner circle. Lots of interesting plot details make this novel a captivating read for the most part.
The only major complaint I have with The Taster by V. S. Alexander is with either chapter 22 or chapter 23. I felt that one aspect of the plot development/plot twist didn't seem very credible to me... I'd mention the specific detail, but hesitate in doing so as I do not want to provide any potential spoilers to future readers of this novel. Additionally, the author seemed a bit over the top about some sentiments that seemed to be a bit overly dramatic. Otherwise, The Taster by V. S. Alexander was a good read.
I also didn't like the narration for The Taster. The accent Carol Monda used sounded like a fake German accent. Plus, the narrator mispronounced the same set of words repeatedly, which was annoying.
Below is the plot summary for The Taster by V. S. Alexander from Audible:

Amid the turbulence of World War II, a young German woman finds a precarious haven closer to the source of danger than she ever imagined - one that will propel her through the extremes of privilege and terror under Hitler's dictatorship.

In early 1943, Magda Ritter's parents send her to relatives in Bavaria, hoping to keep her safe from the Allied bombs strafing Berlin. Young German women are expected to do their duty - working for the Reich or marrying to produce strong, healthy children. After an interview with the civil service, Magda is assigned to the Berghof, Hitler's mountain retreat. Only after weeks of training does she learn her assignment: she will be one of several young women tasting the Führer's food, offering herself in sacrifice to keep him from being poisoned.

Perched high in the Bavarian Alps, the Berghof seems worlds away from the realities of battle. Though terrified at first, Magda gradually becomes used to her dangerous occupation - though she knows better than to voice her misgivings about the war. But her love for a conspirator within the SS and her growing awareness of the Reich's atrocities draw Magda into a plot that will test her wits and loyalty in a quest for safety, freedom, and, ultimately, vengeance.

Vividly written and ambitious in scope, The Taster examines the harrowing moral dilemmas of war in an emotional story filled with acts of extraordinary courage.

I am giving The Taster by V. S. Alexander a rating of 4 stars out of 5 stars.
Until my next post, happy reading!!
Posted by Captivated Reader at 10:05 PM