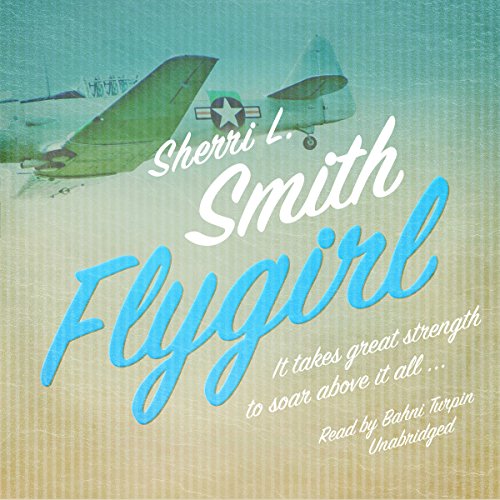 As many of you may already know, I love reading historical fiction and the writing is wonderful for Flygirl by Sherri L. Smith. I enjoyed the characters very much for Flygirl, especially the main character of Ida Mae Jones as she is smart and driven.

The storyline for Flygirl is well done too. I enjoyed that this novel is set in the 1940s in the USA during World War II. The focus is on Ida Mae's dream of becoming a licensed pilot during a time when both women and blacks were discriminated in the field of flying.

So how does a young, black woman become a pilot? Ida Mae learns from her younger brother about the newly created Women Airforce Service Pilots (WASP) program created by the US Army and she decides to apply... But Ida Mae fears the WASP won't accept her into the WASP program because she's a black woman. As a very light skinned black woman, Ida Mae is easily able to hide the fact that she is a young, black woman. But Ida Mae is always fearful that she'll be discovered as a black woman and kicked out of the WASP program. The burden of disguising one's heritage weighs heavily on Ida Mae throughout Flygirl and we read how this burden plays out throughout the novel.

Additionally, Ida Mae excels as a pilot and rises to the challenge. She forages strong bonds with a few of her other WASP classmates and eventually makes it through the WASP program despite the odds of making it through such a rigorous program.

All in all, Flygirl by Sherri L. Smith is a great read.

Below is a summary for Flygirl by Sherri L. Smith from the author's website:

Ida Mae Jones dreams of flight. Her daddy was a pilot and being black didn’t stop him from fulfilling his dreams. But her daddy’s gone now, and being a woman, and being black, are two strikes against her. When America enters the war with Germany and Japan, the Army creates the WASP, the Women Airforce Service Pilots—and Ida suddenly sees a way to fly as well as do something significant to help her brother stationed in the Pacific. But even the WASP won’t accept her as a black woman, forcing Ida Mae to make a difficult choice of “passing,” of pretending to be white to be accepted into the program. Hiding one’s racial heritage, denying one’s family, denying one’s self is a heavy burden. And while Ida Mae chases her dream, she must also decide who it is she really wants to be.

I am giving Flygirl by Sherri L. Smith a solid 4 stars out of 5 stars.

Posted by Captivated Reader at 3:58 PM