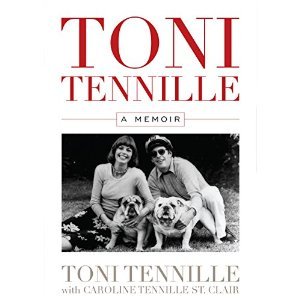 So, I've had Toni Tennille: A Memoir by Toni Tennille on my reading wishlist since its release in July 2016. I remember as a child of the 1970s listening to Captain and Tennille's hit song 'Love Will Keep Us Together' and liking this song as it has such a catchy, upbeat beat to the lyrics.

I must say that Toni Tennille's memoir is one of the best celebrity memoir's I've read. I loved it and finished listening to it within 48 hours of starting it. I thought her memoir was well balanced in that it covered her childhood, teenage years, young adult life, first marriage and divorce, how she met Daryl Dragon and their entry in to the music industry, their career highlights, later years and her eventual divorce from Daryl Dragon in 2014 thoroughly.

I learned a lot of things about Ms. Tennille's life that I never knew before listening to her memoir... More information than I had ever expected to learn. I also felt like Ms. Tennille was very genuine and open about her life with her readers.

One of the areas that was touched upon in much detail was Ms. Tennille's relationship with her ex-husband, Daryl Dragon. I would never have guessed what a difficult relationship she had with him as they seemed to work beautifully together as the dynamic musical duo they were. Prior to reading Tennille's memoir, I recall being saddened to learn of her divorce to Daryl Dragon after 39 years of marriage as they had seemed outwardly (to me at least) to be a happy couple. In Toni Tennille's memoir, we learn just what a difficult, controlling person, Daryl Dragon really was. In fact, he sounded a bit on the neurotic side with some of his behavior if you ask me. I'm surprised they stayed married as long as they did after reading Tennille's account of their marriage.

Since bursting onto the scene in the mid '70s, the pop duo Captain and Tennille have long defined the sparkling, optimistic idea of everlasting love, both in their music and through their image as a happy and, seemingly, unbreakable couple. They were an irresistible pair to millions of fans all over the world, further underscored by the rousing "yes, we can!" gospel of their biggest hit, "Love Will Keep Us Together". But underneath the image was an entirely different story that the fans never saw: a woman who fought a lonely struggle against the controlling and often bizarre behavior of her emotionally inaccessible husband.

Toni Tennille: A Memoir is a visceral account of Toni Tennille's life from her childhood in the segregated South to her thrilling rise to fame in the world of pop music to where she is now: no longer one-half of a famed couple but a stronger woman for all she has experienced - both the good and the bad. Toni hopes that her story will help anyone who feels trapped in a toxic relationship realize that it is never too late to break away from it.