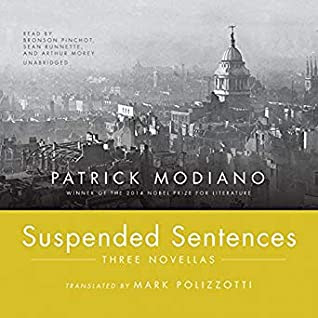 Below is the summary for Suspended Sentences (Three Novellas) by Patrick Modiano from Audible:

In this essential trilogy of novellas by the winner of the 2014 Nobel Prize in Literature, French author Patrick Modiano reaches back in time, opening the corridors of memory and exploring the mysteries to be encountered there. Each novella in the volume - Afterimage, Suspended Sentences, and Flowers of Ruin - represents a sterling example of the author's originality and appeal, while Mark Polizzotti's superb English-language translations capture not only Modiano's distinctive narrative voice but also the matchless grace and spare beauty of his prose.

Although originally published separately, Modiano's three novellas form a single, compelling whole, haunted by the same gauzy sense of place and characters. Modiano draws on his own experiences, blended with the real or invented stories of others, to present a dreamlike autobiography that is also the biography of a place. Orphaned children, mysterious parents, forgotten friends, enigmatic strangers - all appear in this three-part love song to a Paris that no longer exists.

Shadowed by the dark period of the Nazi Occupation, these novellas reveal Modiano's fascination with the lost, obscure, or mysterious: a young person's confusion over adult behavior; the repercussions of a chance encounter; the search for a missing father; the aftershock of a fatal affair. To listen to Modiano's trilogy is to enter his world of uncertainties and the almost accidental way in which people find their fates.

I am giving Suspended Sentences (Three Novellas) by Patrick Modiano a rating 3 stars out of 5 stars.

Posted by Captivated Reader at 1:30 PM