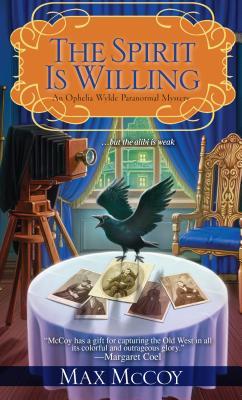 In the Old West, murder is a way of life. But psychic detective Ophelia Wylde is dealing out her own brand of justice by talking to the victims . . . after they’re dead.

Ghost In The Machine

It’s one of the strangest trials in Colorado history. A “spirit photographer” is accused of fraud, and Ophelia Wylde agrees to examine the man’s ghostly portraits and testify in court. In a sealed room, she is presented with five photographs. Four are obvious fakes. But one photo—featuring a powerful politician, Jackson Miles, with a sorrowful ghost in chains behind his shoulder—is the real McCoy. When Ophelia makes contact, the spirit is in such agony that she’s unable to learn anything but his name: Angus Wright. Intrigued, Ophelia sets out to learn more about the wronged Mr. Wright and discovers he was murdered nearly twenty years ago during the Gold Rush. The politician is somehow involved, and Ophelia has to watch her step. Because the living are much more dangerous than the dead . . .

I am giving The Spirit is Willing (Ophelia Wylde Paranormal Mystery #2) by Max McCoy a rating of 3 stars out of 5 stars.
Until my next post, happy reading!
Posted by Captivated Reader at 2:16 PM