Such A Quiet Place by Megan Miranda 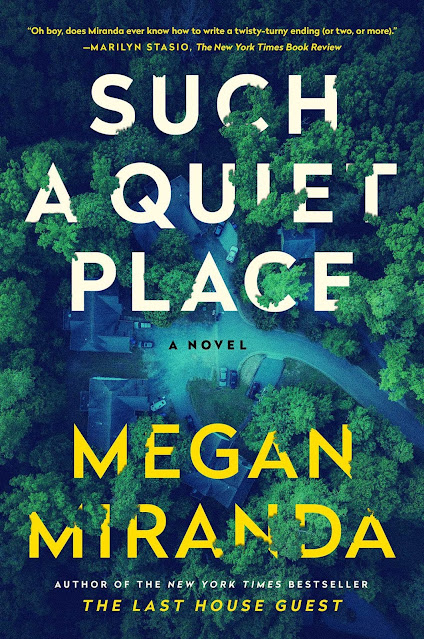 Below is my honest, unbiased review of Such A Quiet Place by Megan Miranda.
To the best of my recollection, Such A Quiet Place is the first novel I've read by Megan Miranda. I'll readily admit that I was drawn to the plot summary for Such A Quiet Place as who wouldn't be drawn to a contemporary thriller with an interesting storyline?
This novel centers around Ruby Fletcher who had been convicted of murdering two of her neighbors, then released from prison over a year later on a technicality only to return to the neighborhood/community she left and tries to mesh back in with her neighbors.
No one knows why Ruby has returned and moved back in with her former friend and roommate, Harper Nash... Even Harper Nash is surprised by Ruby's return and isn't comfortable with Ruby's presence back in the neighborhood or in her home... But Harper can't bring herself to confront Ruby with the answers she needs and wants or ask Ruby to leave... There is a sense of fear, concern, guilt, and not truly knowing if Ruby Fletcher is innocent or guilty as charged. Ruby's return sets off a lot of uncertainty and fear for the resident's within the neighborhood of Hollow's Edge.
Initially, I liked the this novel at the very beginning, but things quickly went south fast for me. I didn't like the character of Harper Nash as she was spineless and seemed to be easily manipulated by others. In fact, I didn't care for many of the other characters in this novel either. Too much drama as well as a cloak and dagger feeling for me to enjoy this book. Chapter 25, one of the last chapters of Such A Quiet Place, felt like a soap opera to me and not very realistic. I also found it rather unbelievable that Harper was able to piece together what really happened all on her on as to what really happened when she seemed an unlikely candidate for this task at the start of this novel.
I also didn't like the author's writing. I felt like Megan Miranda was too busy trying to manipulate the reader by trying to get them to feel a certain way or creating a certain atmosphere that felt forced to me. This feeling left me wanting to ditch the novel several times, but I carried onward hoping for a satisfying ending that didn't come.

Below is the plot summary for Such A Quiet Place by Megan Miranda from Goodreads:

We had no warning that she’d come back.

Hollow’s Edge used to be a quiet place. A private and idyllic neighborhood where neighbors dropped in on neighbors, celebrated graduation and holiday parties together, and looked out for one another. But then came the murder of Brandon and Fiona Truett. A year and a half later, Hollow’s Edge is simmering. The residents are trapped, unable to sell their homes, confronted daily by the empty Truett house, and suffocated by their trial testimonies that implicated one of their own. Ruby Fletcher. And now, Ruby’s back.

With her conviction overturned, Ruby waltzes right back to Hollow’s Edge, and into the home she once shared with Harper Nash. Harper, five years older, has always treated Ruby like a wayward younger sister. But now she’s terrified. What possible good could come of Ruby returning to the scene of the crime? And how can she possibly turn her away, when she knows Ruby has nowhere to go?

Within days, suspicion spreads like a virus across Hollow’s Edge. It’s increasingly clear that not everyone told the truth about the night of the Truett’s murders. And when Harper begins receiving threatening notes, she realizes she has to uncover the truth before someone else becomes the killer’s next victim.

I am giving Such A Quiet Place by Megan Miranda a rating of 2 stars out of 5 stars.