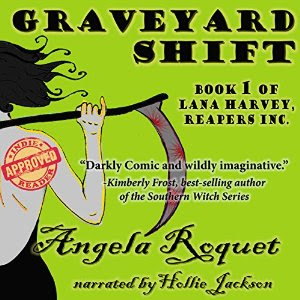 I wasn't impressed with Graveyard Shift (Lana Harvey, Reapers Inc. Book 1) by Angela Roquet. I enjoyed the premise of this novel and felt the storyline itself overall was a decent one. I also felt that this novel was well narrated by Hollie Jackson. But, something about this novel didn't do it for me. The interplay between some characters seemed to be less than grand. Parts of the plot just didn't work for me because they weren't that interesting.

The following is the publisher's summary found on Audible's website:


The inferno has evolved.

Lana Harvey is a reaper, and a lousy one at that. She resides in Limbo City, the modern capital of the collective afterlives, where she likes to stick it to the man (the legendary Grim Reaper himself) by harvesting the bare minimum of souls required of her. She'd much rather be hanging out with Gabriel, her favorite archangel, at Purgatory Lounge. But when a shocking promotion falls in her lap, Lana learns something that could unravel the very fabric of eternity. If the job isn't completed, there could be some real hell to pay.

I am giving Graveyard Shift (Lana Harvey, Reapers Inc. Book 1) by Angela Roquet a rating of 2 stars out of 5 stars.

Until my next post, happy reading!!
Posted by Captivated Reader at 11:35 AM