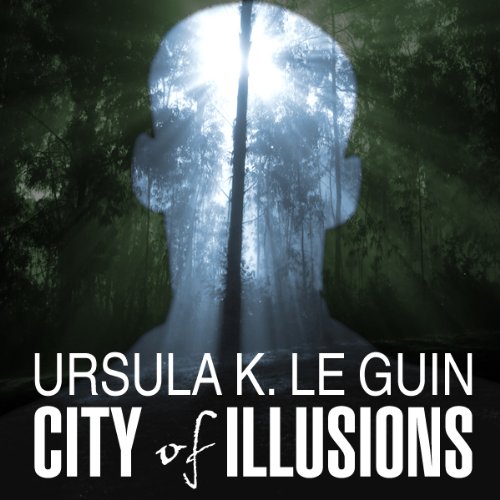 I enjoyed listening to the unabridged audio version of City of Illusions by Ursula K. Le Guin and narrated by Stefan Rudnicki.

City of Illusions is the first novel I've ever read by Ursula K. Le Guin!! It was first published in 1967 and is the third novel in Le Guin's 'Hainish Cycle' series. Initially, I didn't know City of Illusions was part of a series when I downloaded it to my iPad from Audible. I simply chose this novel because I'd been wanting to read a novel by Ursula K. Le Guin for quite a while and also because the plot sounded alluring.

I've heard great things about Ursula K. Le Guin's writing and novels in general, which is why I chose to read one of her novels. However, I do not read a lot of science fiction or fantasy novels. I wasn't quite sure what to expect from a novel published 54 years ago and also from a genre I normally do not read. Long story short, I was blown away by City of Illusions by the time I was finished listening to it yesterday afternoon. City of Illusions is an excellent read! Other than a few minor issues, I enjoyed reading this novel from start to finish. Additionally, I didn't feel like I missed anything by not reading the first two novels in the 'Hainish Cycle' series before reading City of Illusions. The characters, plot development, storyline, and writing were all well done.
City of Illusions contained a bit of mystery within it. The main character, Falk, is an adult at the start of the novel, but his memory has been erased and he is like an infant in that he knows nothing (not even language) and has no memory at all except for a few mental images that he can't make sense of. Falk literally starts life  all over again. As Falk gains knowledge, he wants to learn where he came from and why his memory was erased. Hence, the journey of self discovery begins and what an interesting journey to discover the truth it is. I look forward to reading more novels by Ursula K. Le Guin.
Listening time for City of Illusions by Ursula K. Le Guin is 7 hours, 22 minutes... And Stefan Rudnicki is an excellent narrator by the way!
Below is the plot summary for City of Illusions by Ursula K. Le Guin from Audible:

He is a full-grown man, alone in dense forest, with no trail to show where he has come from and no memory to tell who or what he is. His eyes are not the eyes of a human. The forest people take him in and raise him almost as a child, teaching him to speak, training him in forest lore, giving him all the knowledge they have. But they could not solve the riddle of his past, and at last he has to set out on a perilous quest to find his true self - and a universe of danger.

I am giving City of Illusions by Ursula K. Le Guin a rating of 4.5 stars out of 5 stars.
Until my next post, happy reading!!
Posted by Captivated Reader at 10:32 AM