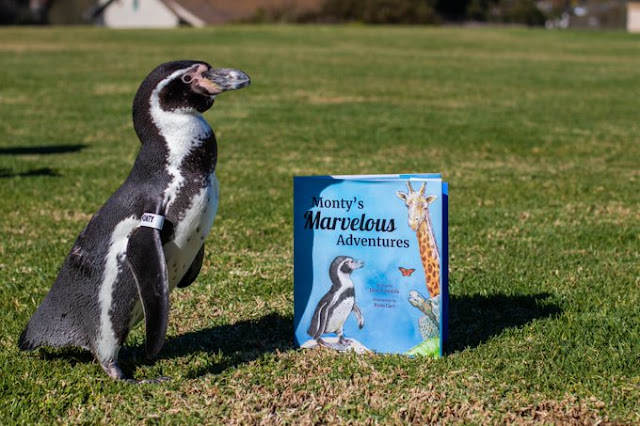 I lived in the Santa Barbara area for 16 years with my husband. We were members of the Santa Barbara Zoo off and on for years when we lived there... And what a spectacular, small zoo it is!! We always enjoyed seeing the animals and exhibits along with attending various zoo events. The Santa Barbara Zoo has ocean views and overlooks the Andree Clark Bird Refuge... It's a lovely place to visit.

Since moving to San Francisco's East Bay Area nearly 7 years ago, I have followed the Santa Barbara Zoo through their Facebook page and have enjoyed keeping up with what has been going on there.

During the pandemic, the Santa Barbara Zoo has been uploading short videos of Monty, the penguin, exploring the zoo on foot with his caretakers and the adventures he has had. These videos have been absolutely fabulous to watch and have become a huge hit with viewers.

So, eventually, a children's book about Monty's adventures at the Santa Barbara was created by author, Dory Edwards and illustrator, Ryan Carr.

On Sunday, March 28th, Dory Edwards and Ryan Carr each spoke about their collaboration on Monty's Marvelous Adventures and the current projects they are each working on now. Dory Edwards even read her book, Monty's Marvelous Adventures, aloud during the event... And it's a really cute children's book with a great message about celebrating our difference, but also how we're really all alike!

Best yet, was a very special appearance made by Monty live during this event with his caretakers from the Santa Barbara Zoo. The zoo staff spoke about Monty. What a fun event!

Below is a short video I discovered on YouTube promoting Monty and the book written about his adventures at the Santa Barbara Zoo!