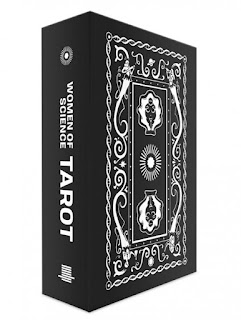 Yesterday morning, I attended yet another wonderful virtual author event hosted by MIT Press from 9:30am to 10:30am. This virtual event was titled MIT Press Live! Presents: Women of Science Tarot.

Below is a summary for Women of Science Tarot from MIT Press:

A tarot deck that features inspirational women of science on the minor arcana cards, plus a guidebook with scientist biographies and other information.

The Women of Science Tarot Deck is a card game that helps us tell stories about our future based on principles of science. Each major arcana card features a fundamental scientific concept like extinction, diversity, or gravity. The 56 minor arcana cards feature inspirational women who have changed the course of STEM. The lively illustrations are by neuroscientist and comic artist Matteo Farinella. For readers new to tarot or those who want to learn more about women in STEM, accompanying the deck is a guidebook with biographies of all the women featured on the cards as well as information about the major arcana cards.

I think the Women of Science Tarot deck looks really cool, but it definitely isn't your traditional looking tarot deck. I still think it looks cool though for its uniqueness alone and decided to order a deck for myself as an early Christmas gift.
Last thoughts... I'm kind of surprised that MIT Press would publish a tarot deck!! This doesn't seem like something they would be interested in publishing. But maybe the 'Women of Science' part is what grabbed their attention. The Women of Science Tarot deck is kind of a novel mash up of joining the topics of science/women scientists and tarot together though.
Posted by Captivated Reader at 12:00 AM