Only Time Will Tell by Jeffrey Archer 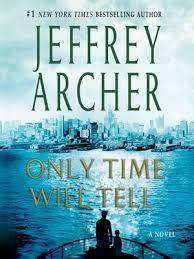 The following is my unbiased review of Only Time Will Tell by Jeffrey Archer.

Only Time Will Tell is the first novel in 'The Clifton Chronicles' and I thought it was well narrated by both Roger Allam and Emilia Fox.

There are things I really enjoyed about Only Time Will Tell and things that I didn't really enjoy about listening to this novel. For instance, I think that Jeffrey Archer is a good storyteller. I enjoyed how he wrote this novel as he divided it into, not only individual chapters, but also in sections. Each section is told from the point of view of one of the main characters. Archer easily moves the narrative from the first person narrative to third person narrative easily for each of the characters. The continuity is fabulous, showing Archer's skill in keeping the story cohesive as he transitions from different points of view and each character's own narrative.

I enjoyed the gripping plot details and wanted to know how events would turn out in the end. I found myself cheering for Harry Clifton (the leading character) and booing the bad guy Hugo Barrington throughout Only Time Will Tell.

Certain plot details in Only Time Will Tell contained predictable outcomes. Yet there were also some wonderful plot surprises as well that I didn't see coming at all.

I didn't like the cliffhanger ending for Only Time Will Tell though. But I suppose it was inevitable that it would end the way it did considering that Only Time Will Tell is the first novel in 'The Clifton Chronicles'. It leaves the reader wondering what will happening next in Harry's journey.

I also thought that the last part of Harry's journey in Time Will Only Tell was a bit boring. I still don't see why he felt the need to work on a ship when he had better opportunities presented to him. I also don't agree with his reason for taking on the identity of another person and the predictable outcome that it lead to at the end of the novel.

One of the wonderful features of listening to the unabridged version of Only Time Will Tell was to hear Jeffery Archer being interviewed at the end of his novel. I enjoy listening to authors speak about their writing and their inspiration for writing their books.

The following is the publisher's summary for Only Time Will Tell by Jeffery Archer from Audible:


From the internationally best-selling author of Kane and Abel and A Prisoner of Birth comes Only Time Will Tell, the first in an ambitious new series that tells the story of one family across generations, across oceans, from heartbreak to triumph.

The epic tale of Harry Clifton’s life begins in 1920, with the words "I was told that my father was killed in the war." A dock worker in Bristol, Harry never knew his father, but he learns about life on the docks from his uncle, who expects Harry to join him at the shipyard once he's left school. But then an unexpected gift wins him a scholarship to an exclusive boys' school, and his life is never the same.

As he enters into adulthood, Harry finally learns how his father really died, but the awful truth only leads him to a question: was he even his father? Is he the son of Arthur Clifton, a stevedore who spent his whole life on the docks, or the firstborn son of a scion of West Country society, whose family owns a shipping line?

This introductory novel in Archer’s ambitious series The Clifton Chronicles includes a cast of colorful characters and takes us from the ravages of the Great War to the outbreak of the Second World War, when Harry must decide whether to take up a place at Oxford or join the navy and go to war with Hitler’s Germany.

From the docks of working-class England to the bustling streets of 1940 New York City, Only Time Will Tell takes listeners on a journey through to future volumes, which will bring to life 100 years of recent history to reveal a family story that neither the listener nor Harry Clifton himself could ever have imagined.

The following is a video of Jeffrey Archer discussing
'The Clifton Chronicles'. Enjoy!!


I am giving Only Time Will Tell by Jeffrey Archer a rating of 3 stars out of 5 stars.

Until my next post, happy reading to you!!
Posted by Captivated Reader at 5:27 PM