The First Counsel by Brad Meltzer 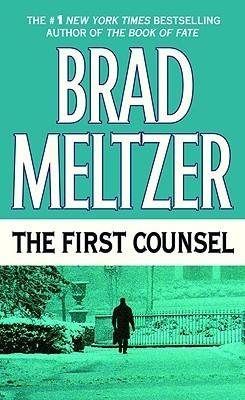 I FINALLY read the paperback edition of The First Counsel by Brad Meltzer, which I've had in my 'to be read' pile since January 2011!!

I purchased this political thriller novel at the FOL Used Bookstore in Carpinteria as I became interested in reading a novel by Brad Meltzer novel after I watched him on the History Channel's Decoded television series years ago.
The First Counsel by Brad Meltzer is the first novel I've read in a long time that is over 500 pages in length. In fact, I can't even remember the last time I read a book that was 500+ pages in length. I usually aim to read books under 350 pages these days.
The First Counsel is the first novel I've read by Brad Meltzer. I can officially say I was underwhelmed by this novel. It took me roughly 2.5 months to finish reading it.
Don't get me wrong, there were several things I enjoyed about The First Counsel... Like the fact that this novel is a political thriller, is set in both Washington DC and the White House... And, of course, the entire premise of this novel is a good one. I also enjoyed reading many of the fast paced, riveting, and well written scenes sprinkled throughout the novel.
However, The First Counsel fell short in many ways for me. I think it dragged on way too long and had many dead spots in the storyline. It also has a predictable bad guy and red herrings. The main character made too many dumb moves for someone who is a seasoned attorney hired to work as part of the White House's in house counsel team. Some of the main characters seemed a bit over the top... mainly, the character of Nora Hartson, the President's daughter in this novel. This novel also read like a made for television movie in parts. So deciding whether I liked this novel or not was a difficult one.
Below is the plot summary for The First Counsel by Brad Meltzer from Amazon:

White House lawyer Michael Garrick has a relatively anonymous position at a very public address. That is, until he starts dating Nora Hartson (secret service code name: Shadow), the sexy and dangerously irresistible daughter of the President. But the confident young attorney thinks he can handle the pressure. Until, out on a date, Nora and Michael see something they shouldn't. To protect her, he admits to something he shouldn't. And when a body is discovered and Michael is the suspected killer, he finds himself on the run. Now, in a world where power is an aphrodisiac and close friends carry guns and are under strict orders to risk their lives, Michael must find a way to prove his innocence.

I am giving The First Counsel by Brad Meltzer a rating of 3 stars out of 5 stars, which I think is generous. I think I'll skip on reading any further books written by Brad Meltzer.

Posted by Captivated Reader at 1:48 PM