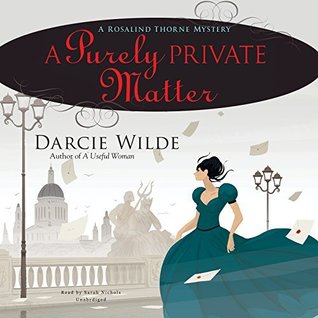 Listening time for A Purely Private Matter by Darcie Wilde is 10 hours, 53 minutes.

I enjoyed A Purely Private Matter by Darcie Wilde more than the first novel in the series and thought Sarah Nichols did a better job narrating this novel as well.

The writing by Darcie Wilde is phenomenal for A Purely Private Matter. I enjoyed the storyline, characters, plot and pacing for this novel a lot. I didn't guess who committed the murder and why until the end. There are lots of interesting twists and turns and intriguing plot details throughout A Purely Private Matter that make for a good read.

Below is the plot summary for A Purely Private Matter by Darcie Wilde from Audible:

The Rosalind Thorne mystery series - inspired by the novels of Jane Austen - continues as the audacious Rosalind strives to aid those in need while navigating the halls of high society.

Rosalind Thorne has slowly but assuredly gained a reputation as "a useful woman" - by helping respectable women out of some less-than-respectable predicaments. Her latest endeavor is a tragedy waiting to happen. Desperate Margaretta Seymore is with child - and her husband is receiving poisoned pen letters that imply that her condition is the result of an affair with the notorious actor Fletcher Cavendish. Margaretta asks Rosalind to find out who is behind the scurrilous letters. But before she can make any progress, Cavendish is found dead, stabbed through the heart. Suddenly, Rosalind is plunged into the middle of one of the most sensational murder trials London has ever seen, and her client's husband is the prime suspect. With the help of charming Bow Street runner Adam Harkness, she must drop the curtain on this fatal drama before more lives are ruined.

I look forward to reading the next novel in the 'Rosalind Thorne Mystery' series. I am giving A Purely Private Matter by Darcie Wilde a rating of 4.5 stars out of 5 stars.

Posted by Captivated Reader at 1:25 PM