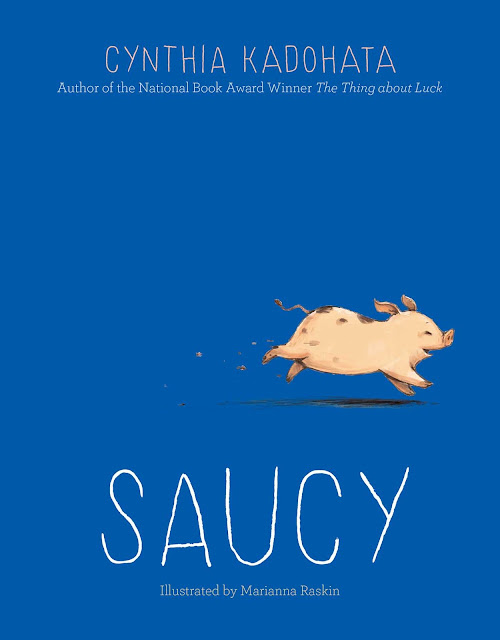 I initially liked Saucy a lot more in the beginning than I did later in the novel. However, I enjoyed reading Saucy by Cynthia Kadohata overall. Saucy is a children's book with a girl named, Becca, as the leading character, which I enjoyed very much as I like seeing women/girls as leading characters in novels. Becca is a quadruplet and has three brothers for siblings. Becca's brothers all seem to be really good at something, but Becca feels she doesn't have any special talents like her brothers do.
Becca, her brothers, parents and grandmother are a tight knit family and all live together in Ohio. As a family, they take nightly walks together. They soon discover an abandoned baby pig in the bushes that was very sick on one of their nightly walks. They rescue this baby pig, which survives and becomes their pet pig, Saucy. Saucy, the pig, becomes Becca's main purpose and gives her direction as she goes about caring for Saucy. In fact, the entire family falls for Saucy and her antics, but a growing pig becomes too much to care for when you do not live on a farm... So, Saucy is given to a pig sanctuary.
Eventually, we learn that Becca and her family live near a pig factory farm they didn't even know existed. Becca and her brothers sneak into the factory farm late one night without their parents knowledge. The kids are horrified by what they find at this farm and decide to rescue nine baby pigs from a horrifying life on the factory farm. One brother even snaps several photos with his smartphone, which they eventually use to make flyers and distribute within their community with help of their friends... The purpose to show the horrors of factory farming. It is eventually realized that Saucy must have come from this same factory farm and some how escaped or was disposed of because she was sick.
Becca feels good about rescuing the pigs. This seems to be her goal/talent in wanting to help animals. Who knows? Maybe Becca will eventually become a vet when she grows up?
Becca also makes up with a friend she feels guilty for abandoning and the two girls become fast friends once again. We even see a budding romance start to grow between Becca's friend and one of her brothers.
Below is the plot summary for Saucy by Cynthia Kadohata from Goodreads:

A story about a girl and her ever-growing pig, Saucy.

Being a quadruplet can make it hard to stand out from the crowd. Becca’s three brothers all have something that makes them...them. Jake has his music and dancing, Jammer plays hockey, and K.C. thinks they’re all living in a simulation and doesn’t see the point of doing much of anything. Becca is the only one with nothing to make her special.

But when she finds a tiny, sick piglet on the side of the road, Becca knows this is it. This is her thing. She names the piglet Saucy and between her own pleading and Saucy’s sweet, pink face, Becca convinces her family to take her in. Soon, Saucy is as big a part of the family as anyone else—and getting bigger. With each pound Saucy gains, the more capable she becomes of destroying the house and landing Becca in trouble.

Some tough decisions need to be made about Becca’s pet, and her search for solutions brings to light exactly where Saucy came from. Turns out, there are a lot more scared piglets out there, and saving them may take Becca and her brothers finally doing something together.

I am giving Saucy by Cynthia Kadohata a rating of 3 stars out of 5 stars.
Until my next post, happy reading!!
Posted by Captivated Reader at 10:02 AM