Ensnared by A. G. Howard 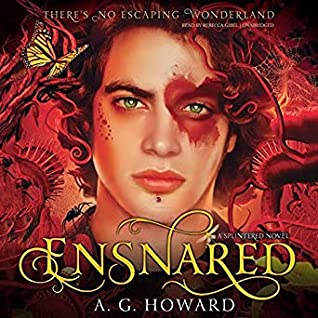 I listened to the unabridged audio version of Ensnared by A. G. Howard and narrated by Rebecca Gibel. This audiobook falls into the young adult genre and is the third book in the 'Splintered' trilogy. Earlier this year, I read and reviewed the first two novels in the 'Splintered' series (Splintered and Unhinged) and really enjoyed them both as well.

If you are a young adult genre fan and also enjoy classic retelling spinoffs, then the 'Splintered' series is worth reading. A. G. Howard is great at world building and storytelling. Ensnared is nonstop action, just like in the previous novels in the trilogy. I also like the characters in the 'Splintered' series as well. What was different in Ensnared? Jeb's character was a lot darker/jaded in this novel than the previous ones. Also, Alyssa'a dad had a more active role in the events in this novel verses a role on the sidelines/background, which was fun to see.

The 'Splintered' series is the third trilogy I've started and finished in 2021. All in all, I enjoyed this series and would recommend it.

Listening time for Ensnared by A. G. Howard is 13 hours, 28 minutes and it is well narrated by Rebecca Gibel.

Below is the plot summary for Ensnared by A. G. Howard from Audible:

After surviving a disastrous battle at prom, Alyssa has embraced her madness and gained perspective. She's determined to rescue her two worlds and the people and netherlings she loves, even if it means challenging Queen Red to a final battle of wills and wiles... and even if the only way to Wonderland, now that the rabbit hole is closed, is through the looking-glass world - a parallel dimension filled with mutated and violent netherling outcasts.

In the final installment of the wildly popular Splintered trilogy, Alyssa and her dad journey into the heart of magic and mayhem in search of her mom and to set right all that's gone wrong. Together with Jeb and Morpheus, they must salvage Wonderland from the decay and destruction that has ensnared it. But if they succeed and come out alive, can everyone truly have their happily ever after?

I am giving Ensnared by A. G. Howard a rating of 4 stars out of 5 Stars.