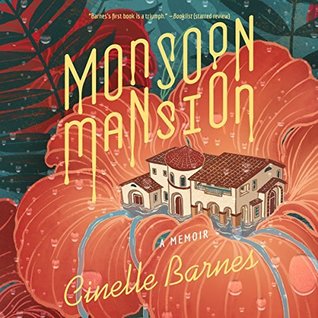 Told with a lyrical, almost-dreamlike voice as intoxicating as the moonflowers and orchids that inhabit this world, Monsoon Mansion is a harrowing yet triumphant coming-of-age memoir exploring the dark, troubled waters of a family’s rise and fall from grace in the Philippines. It would take a young warrior to survive it.

Cinelle Barnes was barely three years old when her family moved into Mansion Royale, a stately ten-bedroom home in the Philippines. Filled with her mother’s opulent social aspirations and the gloriously excessive evidence of her father’s self-made success, it was a girl’s storybook playland. But when a monsoon hits, her father leaves, and her mother’s terrible lover takes the reins, Cinelle’s fantastical childhood turns toward tyranny she could never have imagined. Formerly a home worthy of magazines and lavish parties, Mansion Royale becomes a dangerous shell of the splendid palace it had once been.

In this remarkable ode to survival, Cinelle creates something magical out of her truth - underscored by her complicated relationship with her mother. Through a tangle of tragedy and betrayal emerges a revelatory journey of perseverance and strength, of grit and beauty, and of coming to terms with the price of family - and what it takes to grow up.

I also came across this YouTube video of Cinelle Barnes being interviewed by Nia Ita.

I am giving Monsoon Mansion by Cinelle Barnes a rating of 3 stars out of 5 stars.